Pump Performance is Key in Nevada Mine Dewatering Operation

Water is a critical element in any mining effort, aiding in everything from dust suppression to actual material recovery. Encountering larger volumes of it, however, can also be one of the biggest hindrances to mine production and efficiency. And when that water contains solids with trace amounts of gold, removing those solids is suddenly a very different procedure, changing from a material disposal effort to one with a focus on material recovery. Such is the case at the Turquoise Ridge gold mine near Golconda, NV, where a pair of Schwing KSP-50 sludge pumps are being used to get dewatered material to a site where its highly-valued content can be recovered. The fact that the area is 1,800 feet straight up and the material has a 40% solids content has taxed such previous efforts. However, the system currently in place has been performing flawlessly for better than nine years now, testimony to both its design and the heartiness of the equipment itself.

The mine at Golconda, an almost decade-long joint venture between industry giants Barrick and Newmont Mining, sits on 50 square miles and has been in operation under various names and ownerships since the early 1900s. With a mine that size (current annual gold outputs at TR are in the 200,000 ounce range), encountering water is a normal part of the process and Turquoise Ridge is no exception, according to Bill Davenport, dewatering supervisor.

“It’s not uncommon to hit ‘pods’ of water or underground streams within the fractures of the rock; it is all naturally occurring water,” he says. “We have a huge development drift in the very bottom of the mine on the main decline drift and at the brow of that drift there is water coming out that just runs down the ramp. There are also areas on another drift in which we were drilling and blasting in advance of utilities and hit a pod that started releasing hot water at a rate of about 40 gallons/minute. Today, throughout the mine, we are pumping out between 650 and 700 gallons a minute—more than a million gallons a day.” 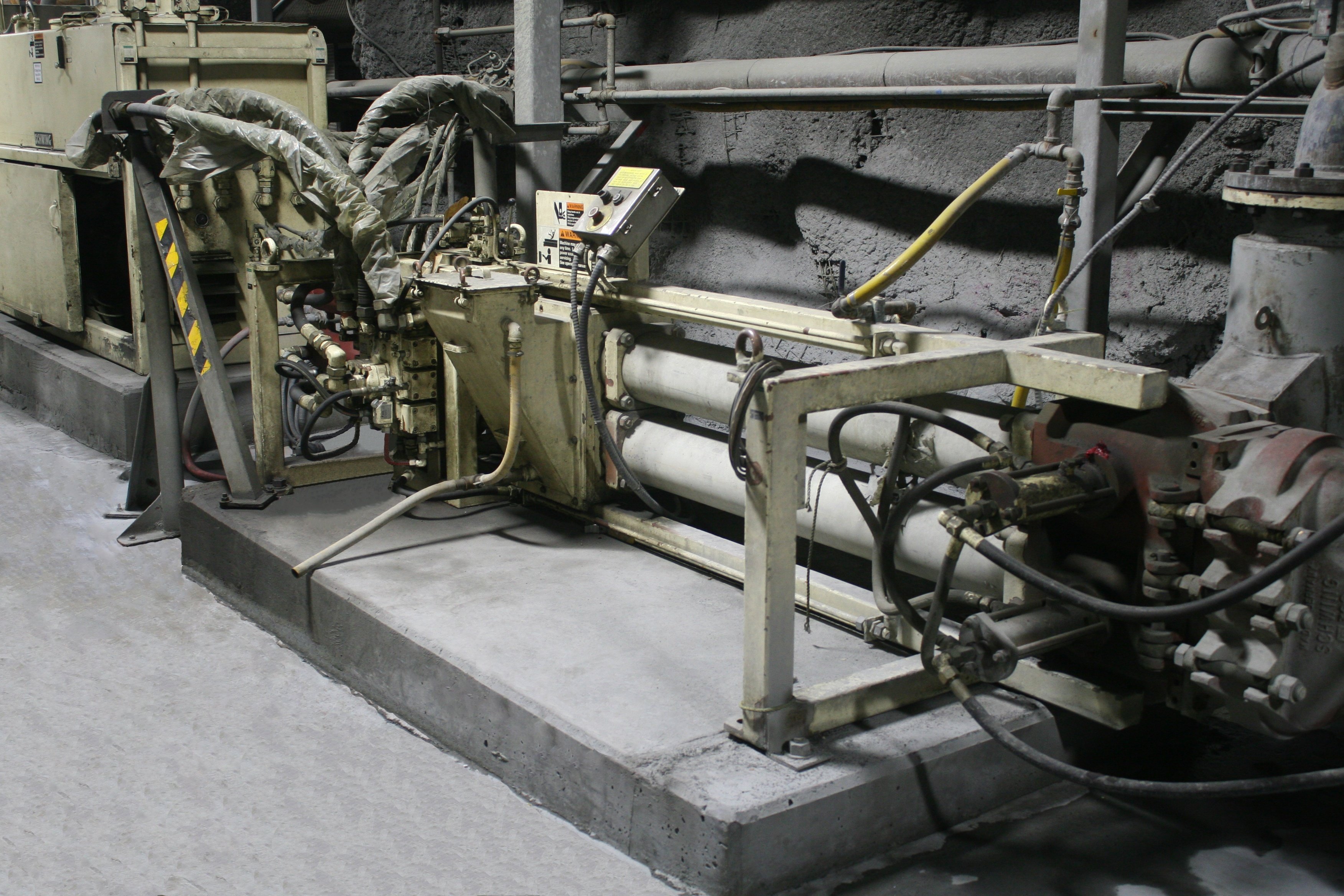 Previous efforts to deal with water issues first included using basic sumps to remove it. Mine personnel would then simply muck the residual solid material, dry it out in various drift locations and haul it to the MHD (material handling drift) to be shipped out of the mine. That all changed when it was discovered that the waste product had value.

“Back then, the residual material wasn’t being assayed for gold value so it was seen as nothing more than waste,” says Davenport. “When it was found to have a decent ore content, the whole process had to be revised. One effort included shipping the discharge water directly to a treatment process facility where it was treated for arsenic and other impurities. There, it was stored in a huge 500,000 gallon thickening tank, the solids were collected and sent on to the tailings facility using underflow thickener pumps.”

While that thought process was sound, adds Davenport, the decision to pump directly to the surface, rather than cascade-pump it from level to level, proved too much for that type of equipment. “When the pumps would fail—which was often—we would flood,” he says.

Around that same time, a hydrology study conducted by an engineering firm warned that, because of the inevitability of hitting more and more large pockets of water, a serious process upgrade was needed.

The JV team regrouped and opted for a design with clarifiers to settle out the dirt and decided that a positive displacement pump would be the best solution to handle a push of that vertical distance. In 2004, a major upgrade to the dewatering effort—including installation of a pair of 200 hp Schwing Bioset KSP 50 HDV sludge pumps—took place and has been at work ever since.

Today all the water from the mining effort at Turquoise Ridge is captured through a series of multi-location, multi-level sumps and drain holes and shipped to either permanent pump skids (with 4” X 3” centrifugal pumps) or to 8” X 6” permanent pump stations. From there it is directed to a trio of 16,000 gallon clarifiers located an area in a drift adjacent to the main dewatering station. The clarifiers act as thickeners allowing the solids in the dirty water to settle out. The clear water is decanted into two other larger 19,000 gallon clear water basins. Half of that clear water is sent on for subsequent treatment and routed to rapid infiltration basins in nearby Valley; the remainder is re-used in the mining operation. Infiltrated water meets Federal drinking water standards.

“At that point, we have to dispose of the solids from the clarifiers, and the pumps make that possible,” says Davenport. “After leaving the clarifiers, that material is about 20% solids content and it has to be pumped through 3-inch pipe almost vertically for a distance of about 1,900 feet. Just after it reaches the collar of the shaft, it is discharged into a 12-inch pipe and carried roughly a mile and a half to the tailings area. That’s an amazing load to place on any piece of equipment”

When the solids content of the material gets too high for effective pumping, onsite personnel simply introduce water to the mixture using a port at the pump’s suction box, lowering the solids and enhancing flowability. Davenport says they run the pumps at the start of each shift for about three hours, and move, on average, about 15 tons of material in a 24-hour period. While performance is an obvious attribute, he is equally pleased with the pumps’ low maintenance demands, citing only a periodic change of poppets, pressure seats and ring to keep them in “fighting” shape.

“By comparison, over at one of our sister mines, we have duplex pumps working in support of autoclaves and the slurries they create. Those are extremely expensive pumps and the maintenance demands associated with them are brutal—that’s a tough one-two punch. Because mines are all about production, they have those pumps working continuously at maximum speed and, as a result, are constantly replacing pistons, rings and so on. Granted, we are only doing a fraction of the volumes they are, but we are pumping against 800 p.s.i. which is huge. As far as reliability and cost to operate, I’m certain our pumps are hands-down a better investment. 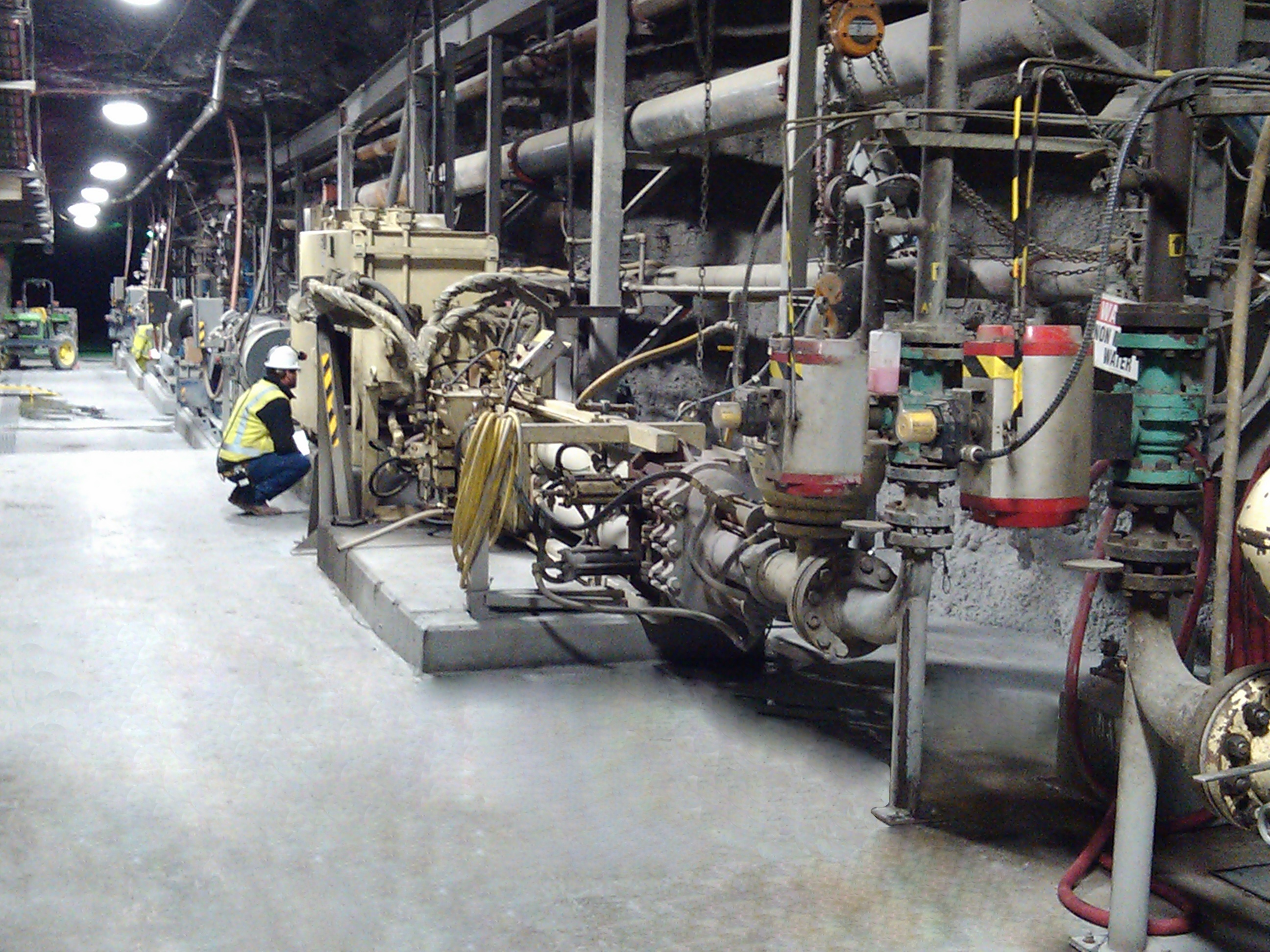 As mentioned above, even the waste product from a mine contains gold—in this case, about ¼ ounce per ton—so material that has been placed to the tailings area is far from ready for disposal.

“The material that the pumps moved out to those 13 cells is dug out and spread to dry prior to shipping it off to Newmont’s Twin Creeks facility to start the process of final recovery. At that point all the gold will have been recovered,” says Davenport

Mining is a tough application on any piece of equipment, but especially so on one that is regularly dealing with high operating pressures and abrasive material. Davenport cites the reliability of the equipment and the solid support they’ve received since installation almost a decade ago as key reasons for that ongoing success.

“My guys maintain them well; in this business you have to,” he says. “But these pumps have been extremely good at providing support to our operation. This mine is growing and its growing to a point where there might be some changes made in a couple of years. There is talk about adding another dewatering site in the lower part of the mine and installing some additional sludge pumps. I can’t say what will happen at that point, but there’s no denying we’ll be thinking about the outstanding performance we’ve gotten from the pumps.”

Contact us to learn more about our pumps for mining, municipal, or industrial applications.