Background: The district of Pima County, AZ, operates a total of eight wastewater treatment plants. The Tres Rios Water Reclamation Facility (WRF) is the centralized biosolids processing facility for all Pima County plants. Tres Rios WRF currently operates 24/7/365 at a 30 MGD capacity, with a projected flow of 50 MGD in 2030. The facility process is; BNR, Anaerobic Digestion, Dewatering, and Land Application of biosolids.

The Tres Rios facility has battled struvite build-up in pipelines and equipment following anaerobic digestion for many years. A combination of Ferric Chloride addition in the process stream and dilution water in the centrate return lines was used to slow struvite build-up. In 2009 the facility began to gather data for side stream treatment to precipitate struvite. Starting with the “big picture,” all possible options were considered, from harvesting struvite from centrate streams to sequestering struvite within the digestate. An on-site pilot study was also conducted to determine levels of performance that could be expected. Ultimately the goals of the project were to stop struvite scaling issues, eliminate the need for Ferric chloride and dilution water addition, and reduce the phosphorus return loading to the plant. This led to the project moving forward to treat digestate and remove phosphorus by sequestering the produced struvite within the biosolids.

The First NuReSys System in North America for Struvite Management: The project is being delivered through a Construction Manager At Risk (CMAR) method via an evaluated bid process. Schwing Bioset, Inc. (SBI) was selected as the system provider in August 2018. The primary objective is to precipitate struvite within the digestate stream for removal with the biosolids. By converting a minimum of 85% of the available orthophosphate into crystalline form (or leaving no more than 50 ppm remaining in reactor effluent), the phosphorus recycle stream back to the head of the plant is broken. Additionally, due to the flexibility and two stage operation of the NuReSys technology, power demands are also able to be minimized resulting in significant annual savings.

The design of the system was finalized through the CMAR design contract with HDR Engineering. During the design process Pima County, HDR, and Schwing Bioset were able to integrate several important features into this design, the following model details the implemented concept: 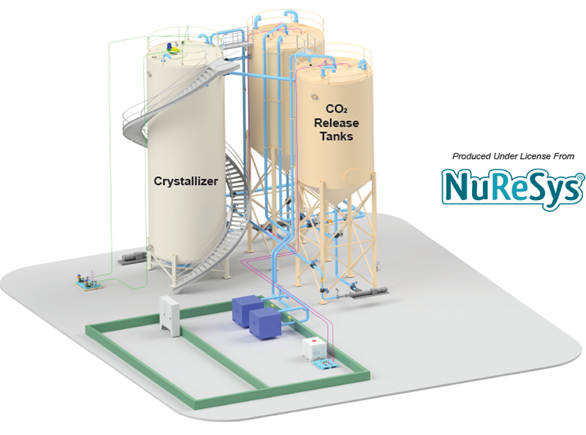 As previously noted, the NuReSys system employs a unique two (2) step process to precipitate struvite in a controlled environment and optionally harvest, on either Digestate or Centrate streams. The first step is pH adjustment. In the CO2 Release Tank the system releases CO2 via coarse bubble aeration to raise the pH to optimum process conditions. The CO2 Release Tank will also consume most of the magnesium remaining in the digestate, producing Magnesium Ammonium Phosphate (otherwise referred to as MAP, or struvite) prior to chemical addition taking place in the Crystallizer. The second crystallization step doses MgCl2 as necessary to complete the struvite reactions.

The Pima County system is currently set up to treat digestate flow following the Anaerobic digesters. The precipitated struvite then becomes entrained in the Biosolids and goes out with dewatered cake. Figure 2 below illustrates this configuration.

The NuReSys system at the Tres Rios facility has two unique design features that both the District and the CMAR found advantageous during the selection process:

As of Fall of 2020, the system is fully operational running in Digestate mode and completing final start-up checks. More importantly, the system is meeting the specified performance criteria for PO4-P removal and Tres Rios has discontinued its Ferric Chloride addition as well as dilution water operations. The NuReSys system has also broken the return phosphorus loop to the headworks. All combined, the system will save the District hundreds of thousands of dollars annually. While there are numerous NuReSys systems operating in Europe, Schwing Bioset Inc. is proud of our first NuReSys installation that will serve as the flagship in North America. 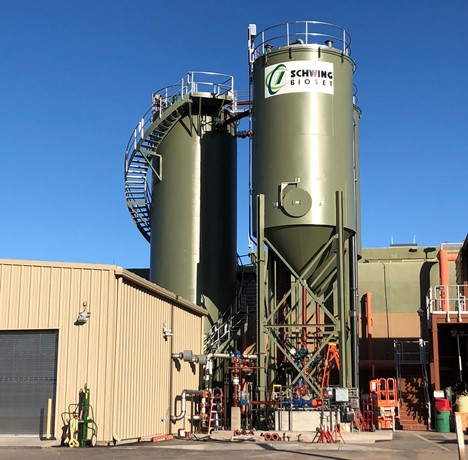