Alabama facility sets lofty goals for its upgrade; meets or exceeds them all.

When the City of Prattville, Alabama, recently chose to upgrade its Pine Creek wastewater treatment facility, it spared no effort in doing so. While they had made smaller, incremental modifications in the past, this time around they took the plant from simply adequate to boldly forward-thinking, designing it to be viable and effective for at least the next quarter century. Included in the wholesale changes was a rethinking of its solids handling capability which, up to that point, was both basic and costly. Today, the Pine Creek Clean Water Facility uses a new approach to aeration, dewaters through a pair of new screw presses, is generating a Class A biosolids for area land application, and is now accepting sludge from a nearby sister facility. In this case, being up a creek is definitely a good thing.

Located 20 minutes northwest of Montgomery, Prattville is a city of 34,000 which has seen some impressive development of late. According to the local Chamber of Commerce, between 2014 and 2018 alone, more than 130 new businesses have opened in Prattville and immediate surrounding areas — a total of $760 million in capital investment. All that growth prompted city officials to look at existing infrastructure demands and determine that upgrades to their wastewater treatment effort were in order.

“This was a wholesale overhaul of the entire treatment process to help deal with the growth in the area,” said Greg
Thompson, project engineer with Engineers of the South. “We are a consulting engineering company and have been working with the City for more than 15 years now. So, we were actively involved in the research and planning leading to the upgrade. The original plant, built in 1979 as part of the Clean Water Act, had a 3 mgd capacity. In addition to options for dealing with the anticipated increases in volume, we talked with city officials about re-thinking the entire biosolids treatment and disposal process.”

Though a plant-wide change was in the cards, the evaluation criteria for that change were very ordered and specific. According to Dale Gandy, Prattville’s Director of Public Works, the desire to use state of the art technology headed up the list of desirables.

“Obviously, we wanted to tap into the strengths of today’s newer technology,” he said. “However, we also wanted to try to utilize ‘green’ infrastructure within the plant; had our sights set on looking into a Class A biosolid; wanted to create an effluent that was cleaner than the environment into which it was headed; wanted the whole effort to be energy efficient; and needed the plant to gain an additional 25-30 years of viability. In addition, because we didn’t have unlimited funds to throw at the project, we had to be relatively cost conscious in our efforts. It was a long list to try to meet but we set out confident that it could get done.”

The new plant design that Thompson and his engineering team — working hand in hand with Gandy and Prattville’s
plant management — envisioned, would take the facility from 3.0 to 5.7 mgd — almost doubling in volume. That
increase in capacity, they felt, would give them the 25-30 year life expectancy they needed. 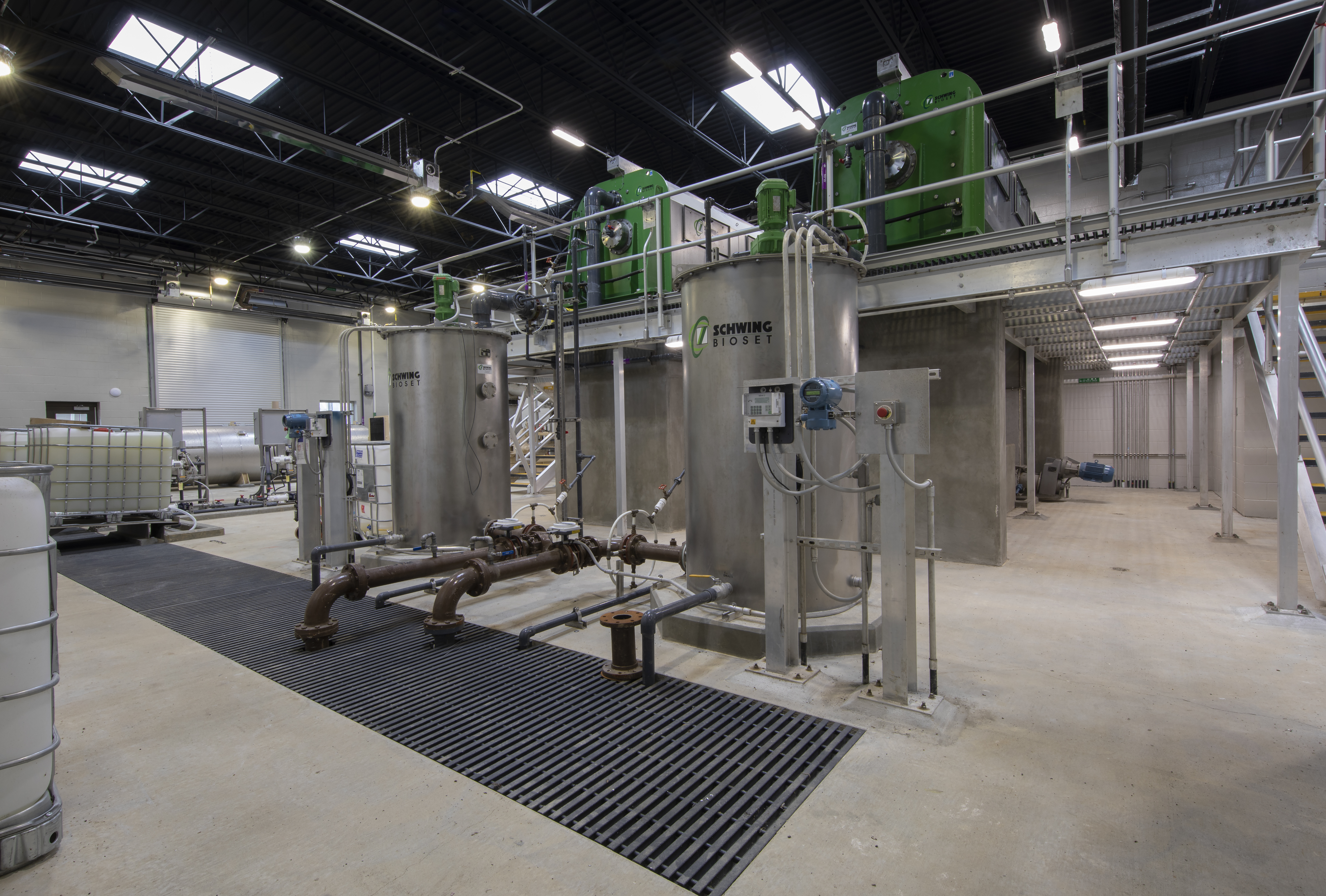 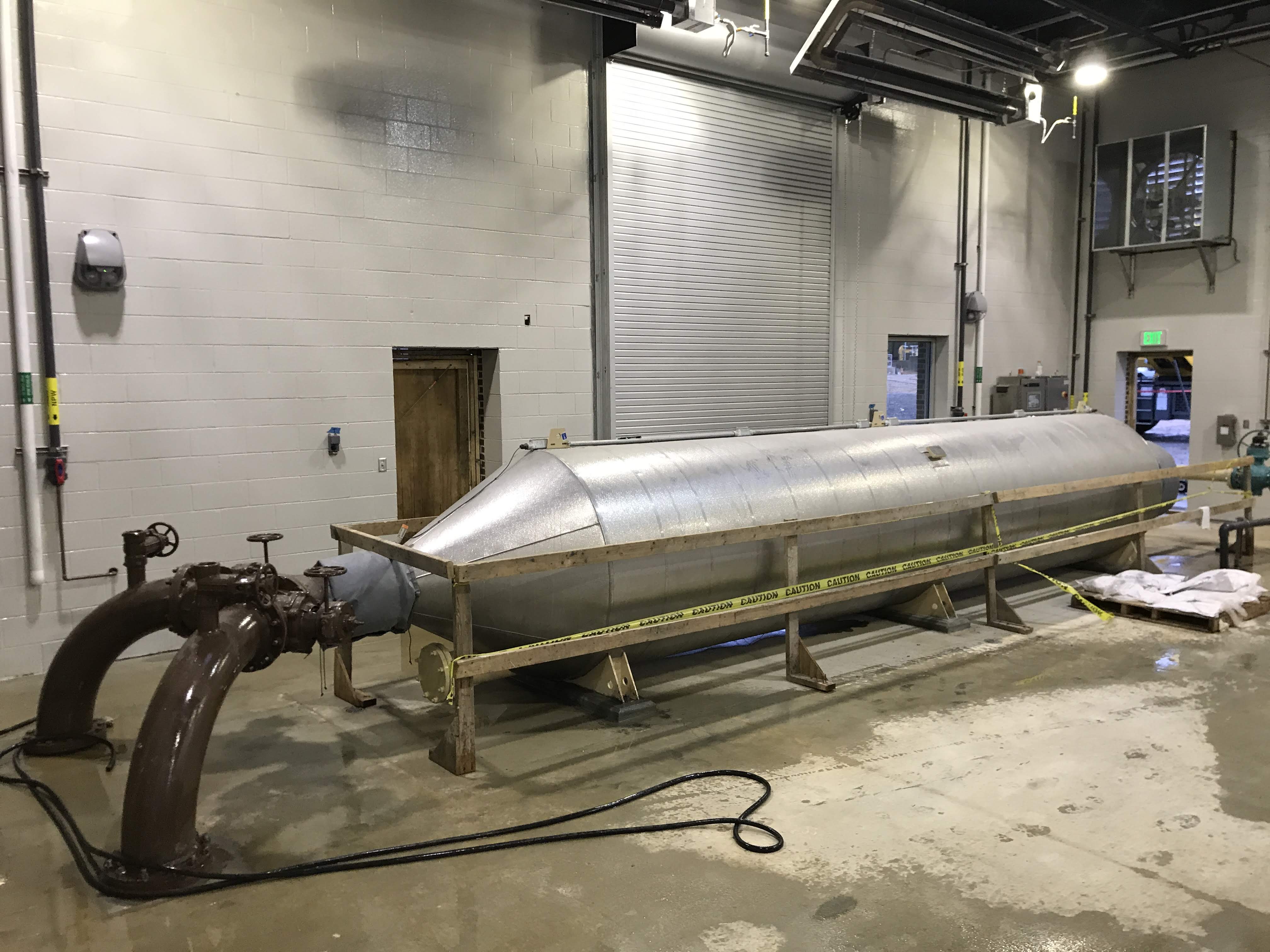 To get to that point, there was not one area of the Pine Creek facility that would be left untouched by the overhaul. Designed in the late 1970s as a conventional activated sludge facility, the plant utilized a coarse screen in a deep sump, prior to the raw sewage pump station, followed by aerated grit removal.

“Aeration in the original design consisted of three parallel basins with two fixed-mounted, low speed surface aerators per basin,” said Thompson. “Control of the aeration system consisted only of locally-mounted low/high-speed selector switches. Not only was the process energy-inefficient, the inability to aerate sufficiently or deal with varying flow rates and oxygen demands led to plant upsets and periodic effluent violations. The warm summer months, when effluent limits are lowest, made it particularly hard for operators to maintain compliance.”

At that time, once biosolids met Class B requirements, they were hauled off to a local field — with 100% of the liquid
— for land application. The facility averaged 10-15 tanker loads of the wet material per day. “But if it had rained and the field was wet, they couldn’t land-apply, so the plant had to be prepared to store material in the digesters,” added Thompson. “It’s not surprising they knew a change was needed.” Finally, the previous clarifiers utilized a mix of organ pipe and scraper blade solids-removal systems. Disinfection, which originally used gaseous chlorine, was updated to UV in a 1999 plant modification.

In With the New

Thompson and his group worked hard, not only to address all the issues with the existing design, but also to ensure
the plant’s viability for decades to come. In aeration, to deal with the high ammonia numbers caused by an inability to nitrify, they opted for a VertiCel solution (Evoqua Water Technologies, Pittsburgh, Pa.).

“VertiCel uses a combination of disk aeration followed by fine bubble diffused air,” said Thompson. “In that way, we
felt we could tap the efficiencies of both types of aeration to meet our need for an energy-efficient design and to get full biological nutrient removal.”

With preliminary design considerations in place, representatives from both the City and Engineers of the
South, visited a number of wastewater treatment plants throughout the southeast U.S. to review various approaches
to dealing with biosolids. One of the things driving the city’s decision to create a Class A biosolid product was, again, growth in the area.

“We were seeing new industries coming in regularly and knew that we could soon be running out of industrial fields
like the one on which we’d been applying,” said Sam Russell, Pine Creek’s former plant manager who was brought on as a consultant during the upgrade. “So, we knew solids handling had to change and that dewatering would be a huge part of that discussion.”

Evaluations of available dewatering options included visits to a half dozen facilities to view belt presses, screw presses and centrifuges, and conversations with operators about their experiences with each. With that growing volume of information at hand, the group started seeing the screw press as the best fit for Prattville, and a visit to a plant in Immokalee, Fla. confirmed that for them.

“Immokalee was an eye-opener for us,” said Thompson. “That installation utilizes a Schwing Bioset screw press
(Schwing Bioset, Somerset, Wisc.) for dewatering and creates a Class A product using the Bioset solution. We saw
so many similarities between what Immokalee had dealt with and our own situation at Prattville that we all felt we’d found our answer. ”

Coming online in August 2019, the biosolids treatment at Pine Creek now begins by taking material from WAS storage basins — where sludge is held, mixed and aerated — and fed to a pair of new Model FSP-1002 screw presses for dewatering. Each of Pine Creek’s screw presses is rated for 1,122 lbs. of dry solids per hour, with a minimum cake dryness of 17% and a 95% minimum system solids capture. With “tweaks” still being made to the process as operations stabilize, the facility is currently getting cake discharged up to 18%. While the performance stats proved key in making their decision, Prattville was also drawn by the self-cleaning function the Schwing Bioset screw press offered, where the units continue to dewater whenever a cleaning cycle is performed. This continuous operation ensures no equalization storage is necessary between dewatering and the Class A operations.

“We have each unit scheduled to clean itself every hour, but that function is flexible and easily changed,” said Napoleon Wilks, Pine Creek’s current plant manager. “We also like the fact that these presses are almost self-operating,” he said. “We have them programmed to run for only seven hours a day, five days a week, which allows us to keep staffing costs down.”

In addition to being a sound decision for the City, the fact that both Sam Russell and Dale Gandy own and operate
farms helped solidify Prattville’s decision to go with a Class A product. Their understanding of the benefits a soil
amendment product can bring, the ways it can be used and how positive it could be to the community, led to that
decision.

“We like what can be done with a good Class A product — whether it’s a resident needing it for flower beds, for grass in front of City Hall, or a farmer using it on crops. And, after seeing the success Immokalee was having, it made sense to go with the Bioset solution,” said Russell. “We also felt that there was a real up-side in accountability
to sourcing both the dewatering and the Class A process from the same company.”

The Bioset process uses a screw conveyor to take Pine Creek’s untreated biosolids from the screw presses to
a twin-screw mixer where quicklime and sulfamic acid are added and mixed. From the mixer, a Schwing Bioset
KSP-25VKL pumps material through a 22 ft. long reactor. There, the chemical reactions raise the temperature and
the pH level, stabilizing the mixture and creating a product that meets EPA Class A requirements.

According to Wilks, they are maintaining a minimum temperature of 131°F (55°C) in the reactor with a retention time of 40 minutes in accordance with the operating conditions approved by the Unites States Environmental Protection  Agency (USEPA) through the Process to Further Reduce Pathogens (PFRP) in the 503 regulations. “The way we process our biosolids today — pushing a lower quantity through there than our future design conditions — material is actually in the reactor far longer than that,” he said. “The results have been a consistently good Class A biosolid that we take to a field owned by the department, dump it, spread it a bit, and turn it for a few days until it dries to a point that we are able to pass it along to a local farmer — and right now he will take all that we can provide.” 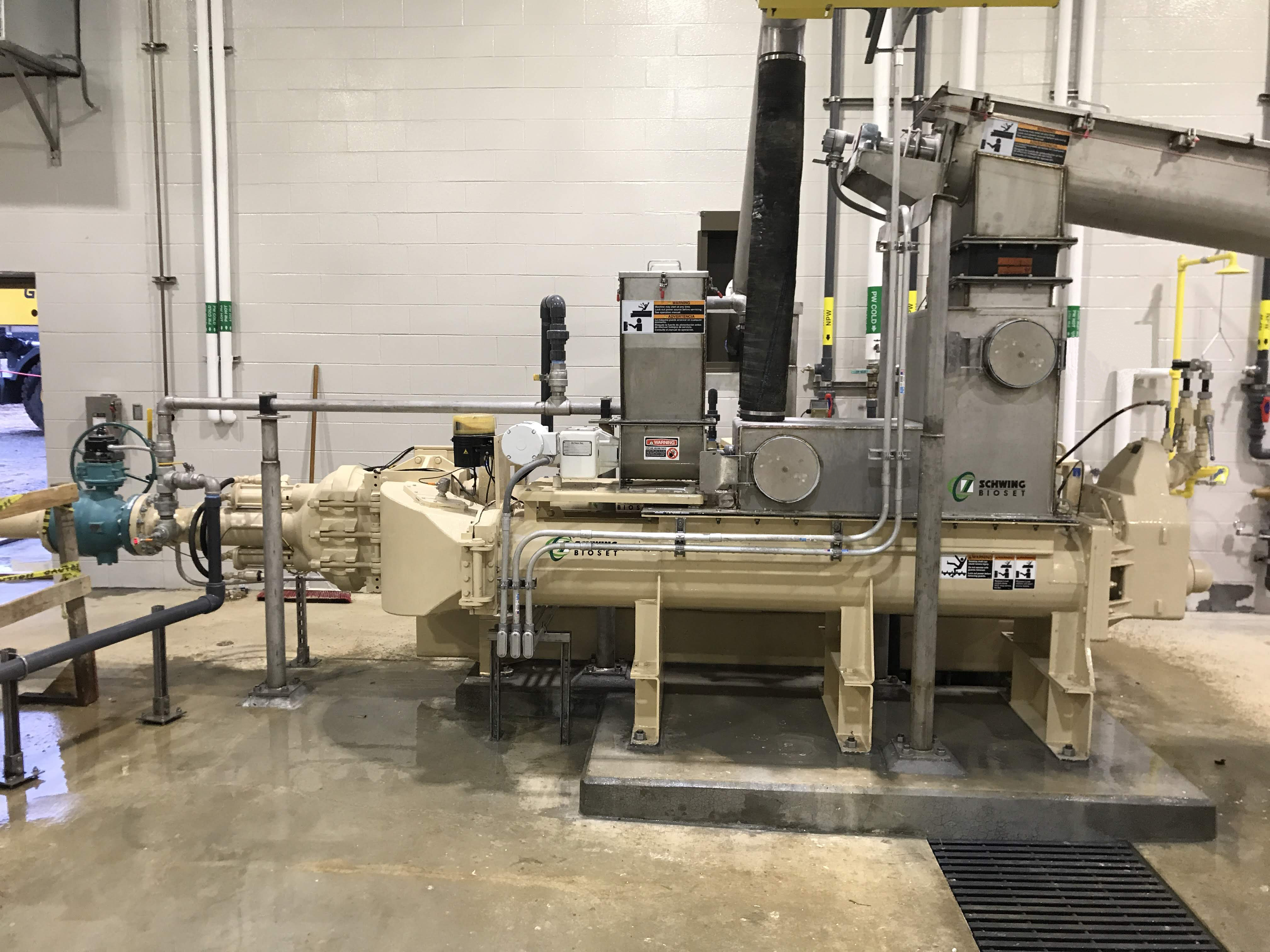 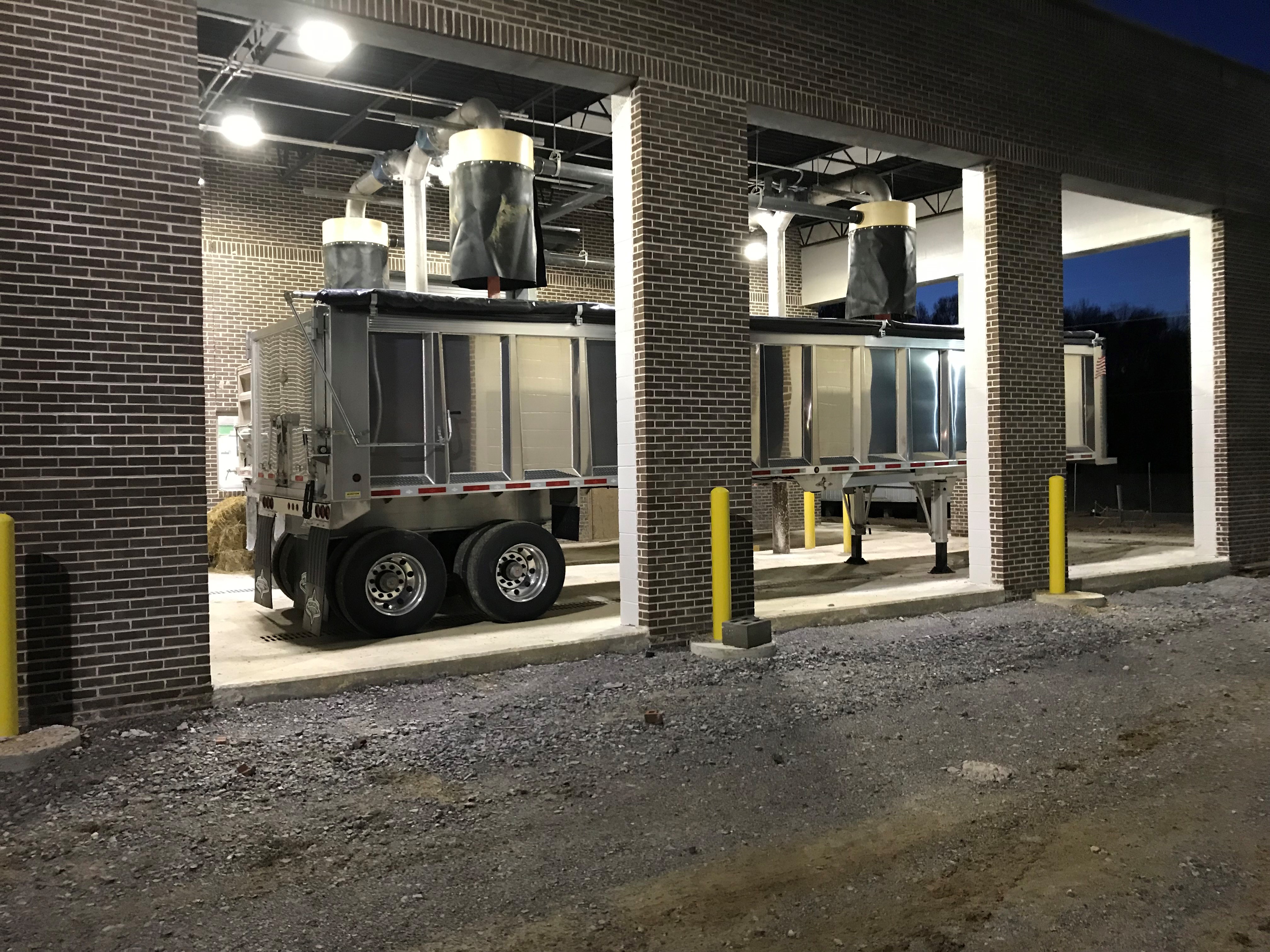 No Mistake About It

In the past, a continual stream of trucks, each carrying roughly 6,800 gallons of liquid headed to the field to
land-apply as much as 81,600 gallons of liquid waste per day. Today’s disposal effort involves just two tri-axle
trucks loaded ¾ full per week. And that energy efficiency criteria? It’s been met to a degree they never imagined,
according to Gandy.

“This is amazing to even comprehend but, despite almost doubling the size of the plant in terms of capacity, when we ran the numbers we found that our energy consumption had only increased by 8%,” he said. “Thinking I must have missed something I checked the data several times and even had a representative from Alabama Power verify
it for me. There was no mistake — that’s how energy efficient this plant is.”

The new biosolids effort is working so well that Pine Creek CWF has already begun processing material from
its sister plant, the 4 mgd Autauga Creek CWF. To do that, the City hauls approximately 200,000 gallons of wet
sludge (at 1.75% concentration ) per month from Autauga Creek to Pine Creek for processing.

Said Gandy: “We set out with a pretty challenging to-do list. But tapping the innovative technology available to us,
we feel we accomplished it all — and then some.”