When an upgrade to the biosolids dewatering component at the Westbrook/Gorham Regional WWTP was needed, a screw press has helped the facility dramatically reduce their sludge hauling/handling costs. 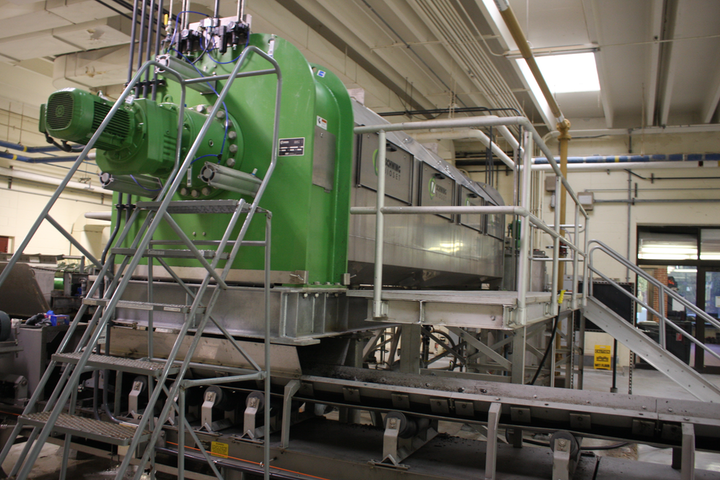 When an upgrade to the biosolids dewatering component at the Westbrook/Gorham Regional WWTP was needed, plant personnel looked at several different available technologies. Handling secondary sludge alone is challenging, and after an extensive trial and evaluated bid process, they opted for a screw press from Schwing Bioset, Inc. Today, sludge leaving the plant is averaging just above 20 percent solids, and the Westbrook/Gorham Regional WWTP has dramatically reduced costs associated with hauling and landfilling their material. Are they pleased? To quote the locals: “Ayuh.”

Diversity in the District

The Portland, Me., Water District (PWD) manages its wastewater treatment through four facilities: East End, the largest plant in the state, which handles wastewater for the Portland metro and surrounding areas; Westbrook/Gorham Regional WWTP, which serves Westbrook, Gorham and a portion of Windham; Cape Elizabeth, which handles wastewater from 3,100 residents in the southern part of the town of Cape Elizabeth; and Peaks Island, which serves 600 island residents — a number that can swell to more than five times that in the summer tourist season. While the Westbrook/Gorham Regional facility is an extended aeration plant, each of the others utilizes a different technology for dealing with their biosolids, according to Steve Picard, the operations foreperson at the plant.

“Within the District, we are certainly varied in our approaches to wastewater treatment,” he said. “East End is a conventional aeration-type plant using clarifiers; Peaks Island is a sequencing batch reactor facility, and Cape Elizabeth is an oxidation ditch plant — they are all similar in many ways but different in others. The Westbrook/Gorham Regional plant was built in 1978. An upgrade to the plant’s aeration system is planned for later in 2020.”

Picard added that three-quarters of the existing plant will be upgraded — a move that will include the addition of new clarifiers mechanisms, a blower facility, and diffused air-type aeration equipment. To show how things have changed, the original plant’s price tag was $14 million; this modification alone is $10 million.

About two years prior to the plant upgrade, the Portland Water District saw the sludge disposal costs Westbrook was incurring and committed to improving the plant’s dewatering capability. Up until then, the facility, which is rated for 4.54 MGD but treats an average flow of about 3.2 MGD, took sludge from the bottom of the final clarifiers, pumped it to a gravity belt thickener where it was thickened to approximately 4 percent solids, and sent it to a 2.5 meter belt press.

“On a good day, that belt press would give us maybe 17–18 percent solids,” said Picard. “Unfortunately, because we deal strictly with an inflow of secondary sludge here at Westbrook, there weren’t many of those good days. To make matters worse, because we were sending that sludge to a trailer for transport to a landfill about three hours away, we were paying to haul a lot of water that didn’t need to be there. That had to change.”

For Schwing Bioset, finding out about the project was a classic case of being in the right place at the right time. For nearly 30 years, Westbrook has been using a Schwing Bioset KSP 10 piston pump to move sludge from the belt press out to the trailers — a distance of more than 70 feet. Word that they were actively seeking equipment to enhance their dewatering effort got the attention of a technician who happened to be on site.

“When I mentioned that we were about to go out to bid for dewatering equipment, the tech said that Schwing Bioset also made a screw press that could be a good fit,” said Picard. “He went back, told his people, and they were suddenly in the running for the bid along with several other manufacturers. Their timing couldn’t have been better.”

“Because we already had the piston pump and power pack from Schwing Bioset, we thought that having a screw press from the same manufacturer — a company that we were already very satisfied with — could only work to our advantage,” said Picard. “However, they also outperformed the others we tested and were within our budget, so we felt confident that we’d made a good decision.”

Features that helped make the case for Westbrook included the unit’s low-speed operation — which enhances its lifespan — and automated control. Ease of regular maintenance was also key, including a split screen casing to simplify access for any maintenance activities such as replacing the sealing lip and eventually the screens. Both items can be replaced without having to remove the screw.

“In addition, because the entire operation is now enclosed, all the odor associated with dewatering is contained,” said Picard. “And finally, we liked the fact that the Bioset press could be cleaned while in use, so the dewatering operation would not be impacted by it. All these played a role in our decision.”

Getting the Numbers Up

Once the new press was in place (the installation was completed by the same contractor that handled their belt press 28 years ago), Picard and his team were initially stymied trying to find the polymer that would give them the numbers they were anticipating. Using the same product they ran with the belt press resulted in no change: solids in the 17 percent range.

“We suspected that was because, unlike the screw press, the belt press had little to no agitation to it and it held the floc together easily,” he said. “However, by the time we tested our fourth polymer, we started getting solids numbers up in the 19–20 percent range. Connecting the screw press to the polymer injection system we had used with the belt press — then adding two more injection points — got us a bit closer.”

In addition to polymer optimization, there was a period of learning how the new system could be successfully operated at the plant. Doing minor adjustments to the injection system prior to running the screw press for several days without making any changes allowed workers at the plant to verify what worked and what didn’t.

“We were closely tracking our polymer feed rate and the cake coming out of the system and, when we started to break 20 percent solids, knew we were on to something,” Picard said. “We learned that, where the polymer is injected into the system is hugely important. Here, in an area one level down from the press, the polymer goes into a check valve which gives it a good primary mix with the sludge, then comes up and into a huge reaction tank equipped with a variable speed mixer. Using that configuration, the difference was impressive: the 2.5–3 percent feed rate at which we used to feed the belt press didn’t even tax the screw press. Instead, we found out the screw press runs great at 4–4.5 percent, which was a nice plus for us.” 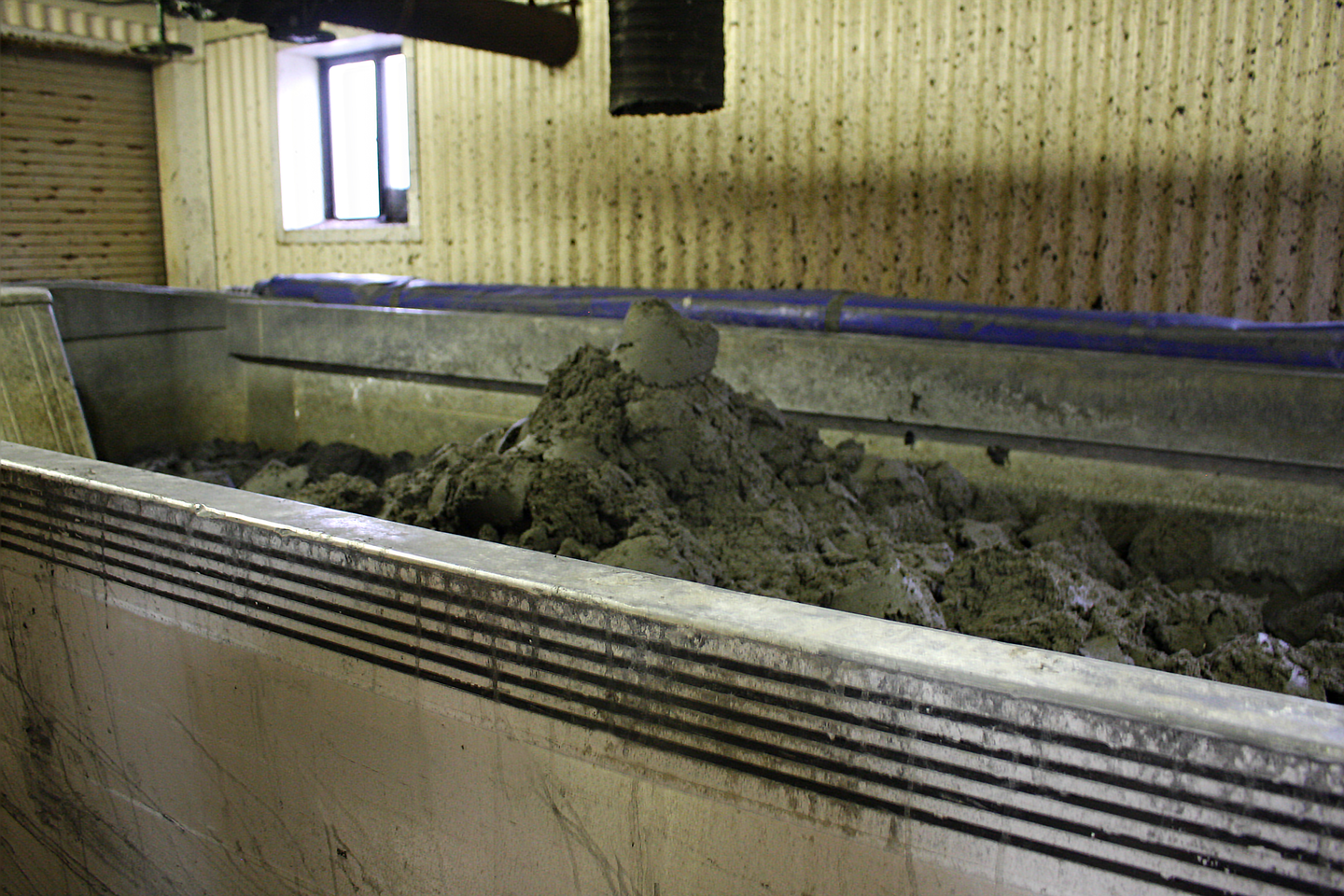 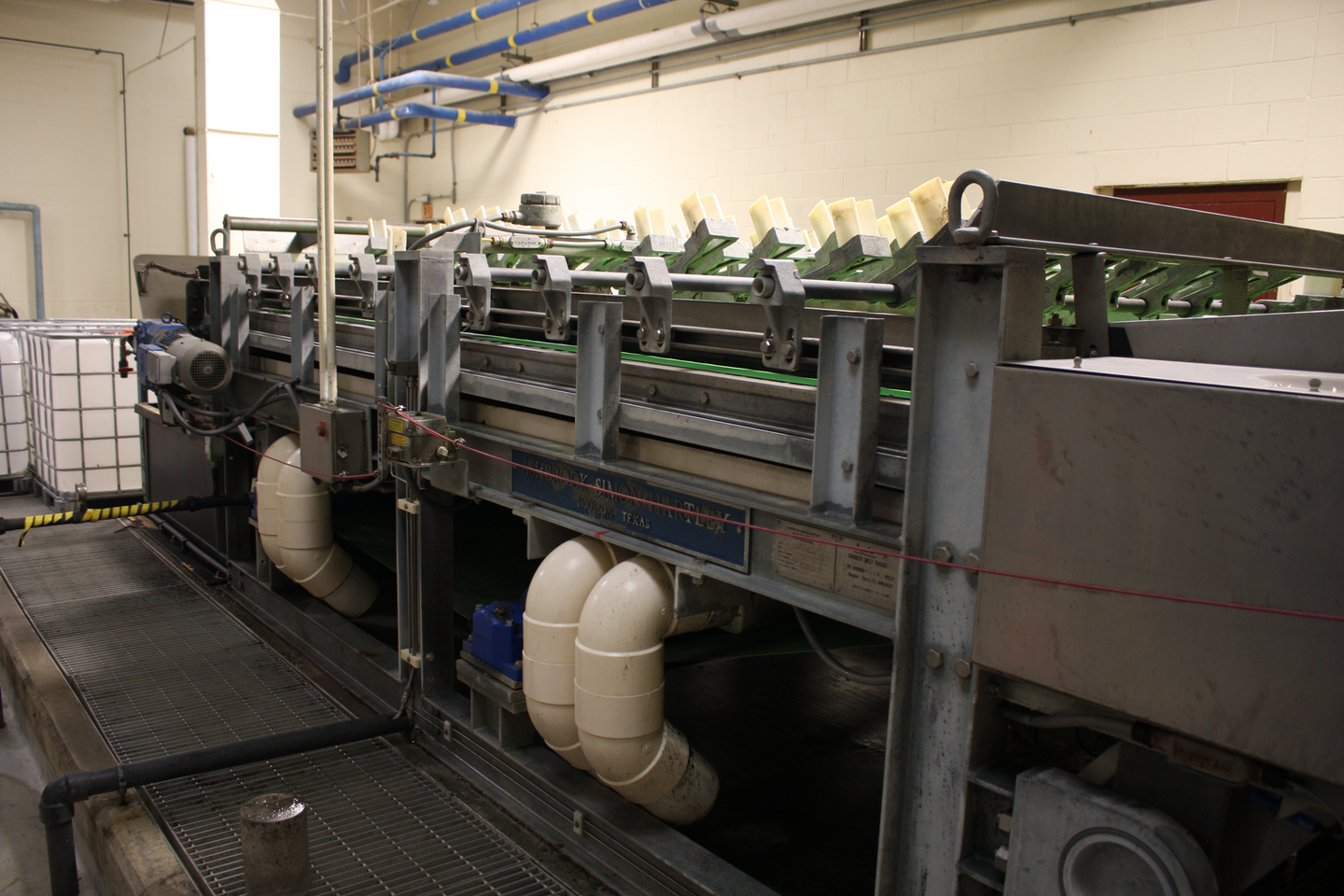 With their tweaks in place, Picard and his team at Westbrook saw a continued uptick to the point where they’ve averaged just over 20 percent solids out of the screw press for just over a year now and have seen that number climb as high as 22.5 percent or 24 percent on some days. That has resulted in a net savings — even with added polymer costs factored in — of about $40,000 annually. To the uninitiated, an increase in solids of up to 5.5 percent might not seem substantial. However, that number still represents a 25 percent increase in performance.

And, said Picard, context is key.

“The difference between the two processes is particularly significant when you remember that we are dealing with a straight secondary sludge which is very hard to dewater,” he said. “Even Schwing Bioset rated the screw press at only 19–20 percent under these conditions.

Today, Westbrook is producing about 30 tons of a better dewatered product every day they dewater during their five-day-a-week operation. By reducing the amount of water in each load, the three-hour trip to the landfill for disposal is far more cost-effective.

“Disposal for us is a costly operation and the Schwing Bioset press has helped significantly knock down those costs,” said Picard. “In addition, there was a good deal of belt spraying, wash water, etc., associated with the previous process, resulting in a constant mist in the air. The place was continually wet where today, things are clean and dry.

He adds that, throughout this conversion process, PWD leadership was outstanding in working with them — giving them support and encouragement all along the way.

“On that note, when we did the screw press install, we kept the belt press here for a year as a backup in case the Bioset didn’t work,” said Picard. “Eventually that belt press was sold for scrap — I guess that says it all.”