Too Valuable to Waste

The strength and resilience of the wastewater treatment industry can often be found in the innovative solutions brought to bear to address the challenges it faces. And those solutions are not being employed solely by WWTPs in big cities or even larger municipalities, but often by small or mid-size operations — entities like the Russellville (Arkansas) Pollution Control Works Facility, for example. Faced with a situation in which they could no longer land-apply their Class B biosolids, plant officials looked for alternatives and opted to upgrade their operation to create a Class A product. In doing so, they’re finding value in their byproduct and have eliminated the need to simply waste it or — as they’ve reluctantly done in the past —  landfill it. A big solution from a smaller operation? Not surprising at all.

Located midway between Little Rock and Fort Smith, Ark., the city of Russellville is home to several major manufacturing facilities as well as the state’s only nuclear power plant. Owned and operated by Russellville City Corporation, the city’s Pollution Control Works Facility (PCWF) serves a population of 30,000 including all of Russellville and the nearby town of Dover. The wastewater collections system consists of roughly 170 miles of gravity sewer, 18 lift stations of various pumping capacities, and 14.1 miles of force main. Approximately 9,000 homes and businesses, and the service lines connecting these homes and businesses constitute an additional 129 miles of sewers — all of which terminate at the PCWF.

According to Randy Bradley, the facility’s wastewater operations manager, the plant has undergone periodic updates in its 55-year history, but really made a seismic shift in its approach a couple years back.

“Up to that point — and still to a large part today — we were a fairly typical operation,” he said. “The plant is designed for 7.3 mgd, and once wastewater gets here, it first goes through some Duperon bar screens to remove plastics and other products that can’t be broken down in normal treatment. After the screens, it undergoes grit removal and is pumped back through the plant where it goes through the primary clarifiers, then to one of three aeration basins — two 450,000 gallon tanks and one 850,000 gallon tank — and into the final clarifiers. A final stop in a chlorine contact chamber allows us to inject some sulfur dioxide to meet the non-detection limit of chlorine just before it is discharged.”

In the past, the facility’s primary sludge and the waste activated sludge from the aeration basins was pumped into a digester, then through a belt press for dewatering and deposited onto trucks that would take it for land application on several pieces of permitted property.

“However, in 2014, land ownership changed on one of those parcels and the new owners no longer wanted sludge on their land. So, we lost that piece of property, which was a substantial loss in available area, and were restricted solely to the parcel we owned. At that time, we were generating about 2400 lbs. per day of the Class B biosolids. Ordinarily, we might have been able to make that work, but, at the time, we had just added another aeration basin and clarifier to the front end of the process, so we knew we were going to be generating more solids. Something had to be done.” 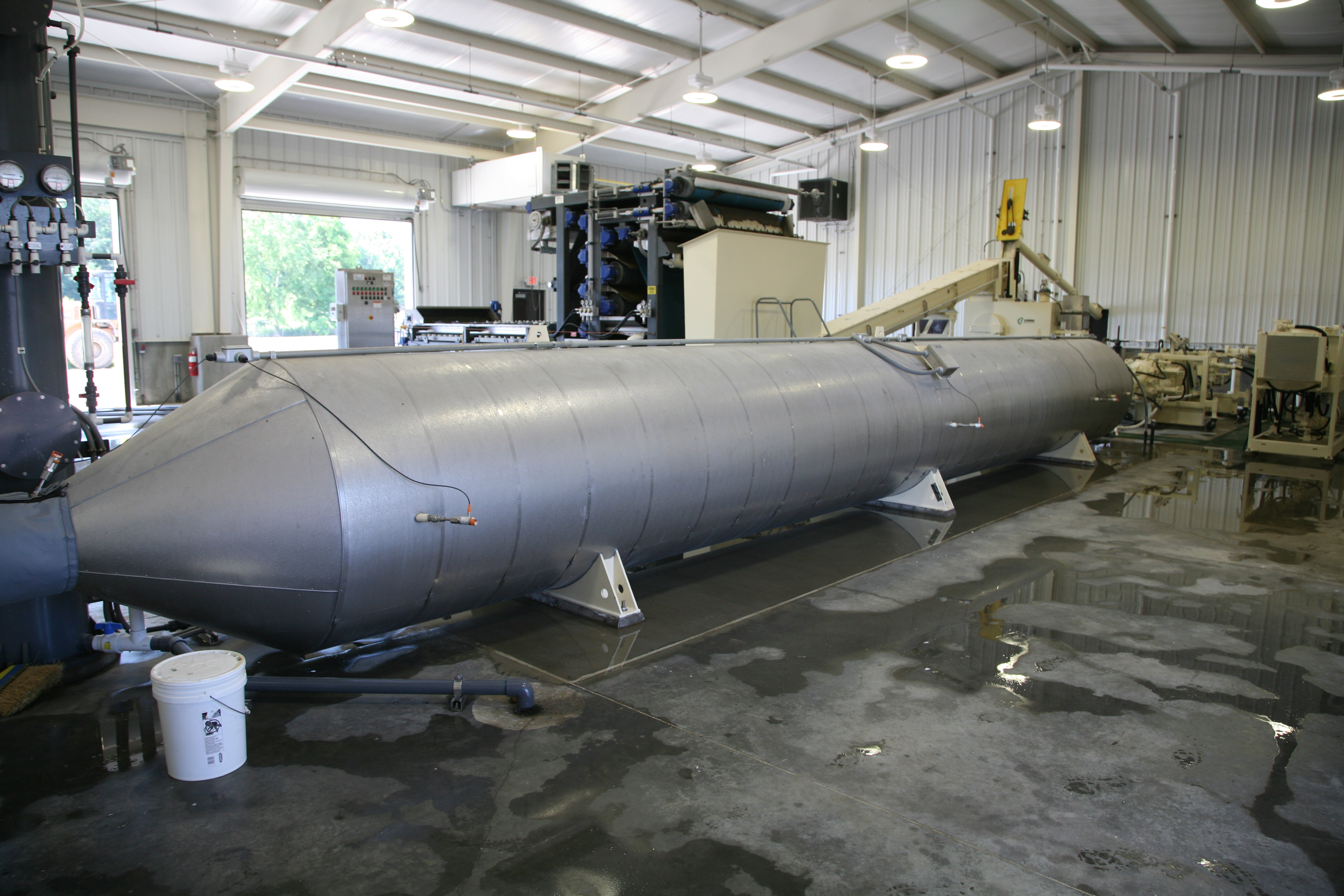 Faced with that situation, the facility conducted an intensive study to look at the options available to them. Those included: increasing the digester volumes or improving the existing ones, composting, and the use of sludge dryers.

“What turned us off to drying the sludge was the significant initial investment,” said Bradley. “And, as I talked to people at other facilities, I discovered that there is a fairly high cost for maintenance on that equipment — that’s a one-two punch we didn’t need. And when we went to a northwest Arkansas composting facility, we found that solution to be very labor-intensive and it would demand much more acreage than we had available. Couple that with the fact that we weren’t certain we could ensure a reliable availability of the organic material needed for the process and it was no longer a serious choice. We needed another viable option and learned about it almost in our backyard.”

At about that same time, the Russellville facility was encountering issues preventing them from maintaining the necessary retention time in their digester to meet Class B specifications, forcing them to truck their biosolids to a nearby landfill. It was a situation that ran counter to everything Bradley and his team stood for.

“We absolutely hate to have to send anything to landfill, and not just because of the costs involved in doing so — though those costs are substantial,” he said. “Landfills have space issues of their own and this is material that can ultimately serve a better benefit. But yet, we were at a point where we had no choice, so we contracted with Denali Water Solutions (Russellville, Ark.) to haul off our sludge. It just so happened that they’d been working on some potential projects with Tom Welch, a regional manager from Schwing Bioset, Inc. and told us about the Schwing Bioset process for creating a Class A biosolid.  After contacting SBI, we were intrigued enough that I, along with Lance Bartlett our utility engineer, and Chesley Jackson my senior operator, took a trip to St. Petersburg, Florida to look at their process in operation and saw the possibilities it held for us.”

In the context of what PCWF’s current solution looks like, the Schwing Bioset process to which Bradley refers, starts by taking biosolids that have been dewatered in a BDP 1.5-meter Model 3DP three-belt press and gravity thickener (at PCWF, dewatered to about 18% dry solids) and dropping them into a hopper with a twin-screw mixer in which quicklime and sulfamic acid are added and blended. The mixing effort helps alleviate issues such as unreacted lime in the final product — and the costs associated with it. A Schwing KSP-25 piston pump then sends the blended material into the 35 ft. long reactor where temps in the 140° F range from the acid/quicklime mixture raise the pH level, stabilize the biosolids mixture, and produce the Class A product PCWF needs. 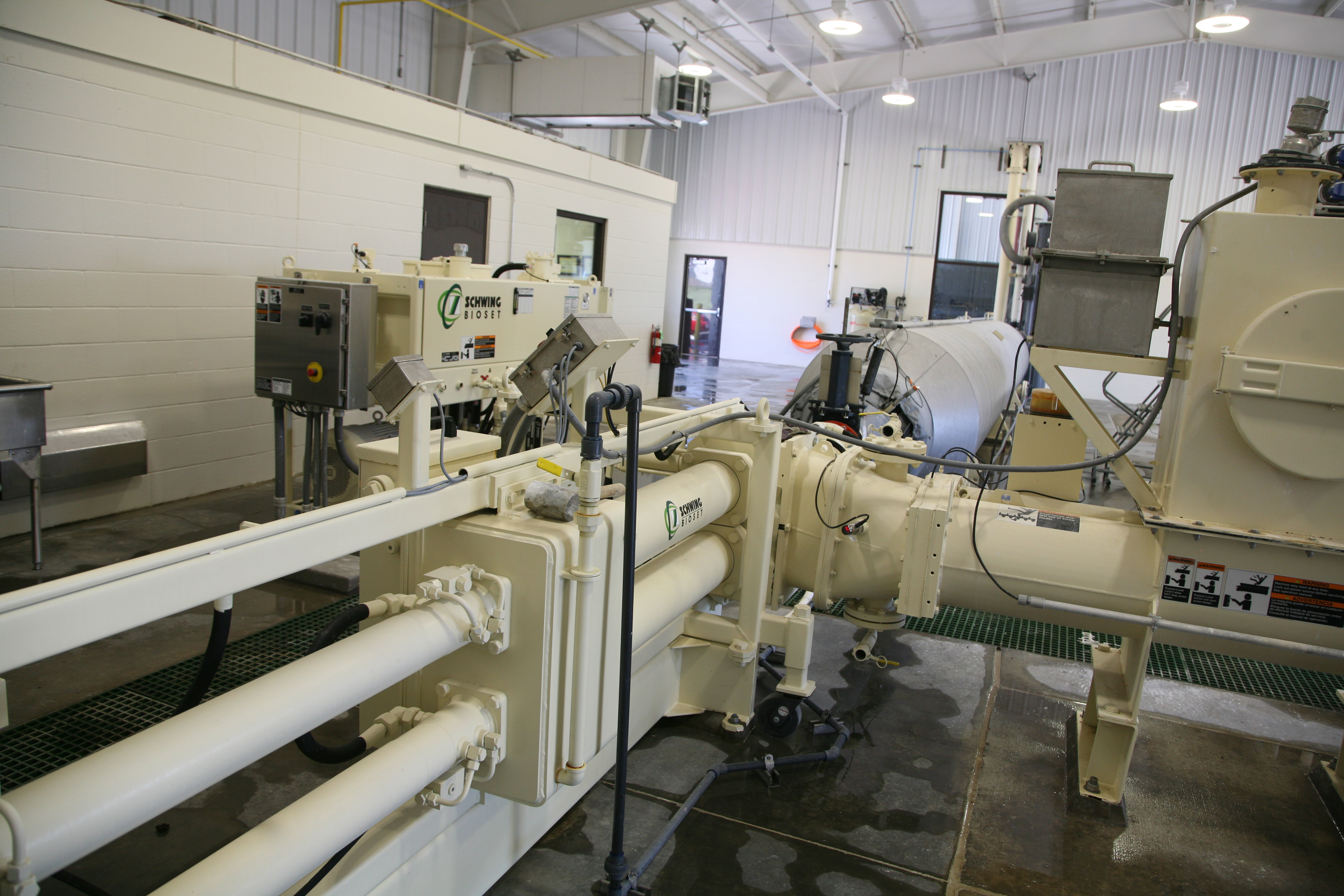 Getting to the point where the Schwing Bioset process was fully theirs and fully online, was something of a departure for all parties involved. According to SBI’s Tom Welch, in a deal that involved the plant’s owners, SBI and Denali Water Solutions, a mobile Bioset system was brought to Russellville to initiate a pilot program in order to prove out the process there.

“The final agreement involved us leasing our mobile Bioset system to Denali which they, in turn, operated for the facility, disposing of the material at an onsite dirt yard. Denali charged City Corporation, the owners and operators of the PCWF, a monthly fee to cover the labor, operation, and lease of the Bioset equipment. However, after the final equipment was purchased and the installation was nearing completion, facility management determined that they had the comfort level to operate the system and manage the disposal of the product themselves. That made good sense since bringing that process in-house would save them a large operating cost.”

Bradley added that the installation process itself was relatively quick and efficient. “Largely due to the help SBI provided — technicians spent the first two weeks with us — the install was very smooth,” he said. “During the design phase, we gave Ft. Smith-based Hawkins-Weir Engineering a projection for where we might be in 10-20 years and they designed the facility for future area development. As a result, the Bioset reactor is sized to handle two belt presses, so, if growth warrants it, we can just move another belt press in without skipping a beat.”

Great for the Soil

PCWF went online with the new system in 2016 and has been processing, on average, 81,000 lbs. of Class A biosolids per month since. Once the material exits the Bioset process, it is loaded onto dual axle dump trucks and taken out to an area adjacent to the plant, spread out using a front-end loader and allowed to dry. Once dry, it is moved into piles and — after periodic testing for salmonella — given away to area farmers.

“We have several farmers competing for it at times, which is great for us,” said Bradley. “While the material has some nutrient value, its ability to boost the pH of soil is its real selling point. Almost all the soil in Arkansas is pretty acidic, so it welcomes that pH boost.

Next spring we are looking at possibly doing some type of bid for it. Simply recouping some of our costs — even enough to pay for fuel for the loader, for example — would be a nice bonus. But right now just having someone haul it off for us and make good use of it a huge improvement over what we did in the past. This entire project could not have gone better nor had better results.”

Contact us to find out how we can help your plant too!