Much like a chain, the wastewater treatment process is made up of individual segments, each linked to the next, each vital to its overall effectiveness. No single facet of the process, nor any single piece of major equipment, is more important than another; if one fails, it all suffers. Occasionally though, one piece of equipment has such challenging demands placed upon it that when it proves itself – and continues to do so for years – it bears mention.

At the Detroit Wastewater Treatment Plant (WWTP), a pair of heavy-duty pumps is used to take high solids-content cake from the dewatering operation to either incineration or a truck loading area.  That, in itself, is not noteworthy.  The fact that it accomplishes this both by pushing cake, dewatered to well over 20% dry solids content more than 500 linear feet, and taking it up five stories, is.  Today those pumps, a pair of Schwing Bioset KSP 110V(HD)L’s, move better than 100 wet tons of dewatered material per hour, have improved the efficiency of the incineration and haul-off operations, and have proven a key part of the system. 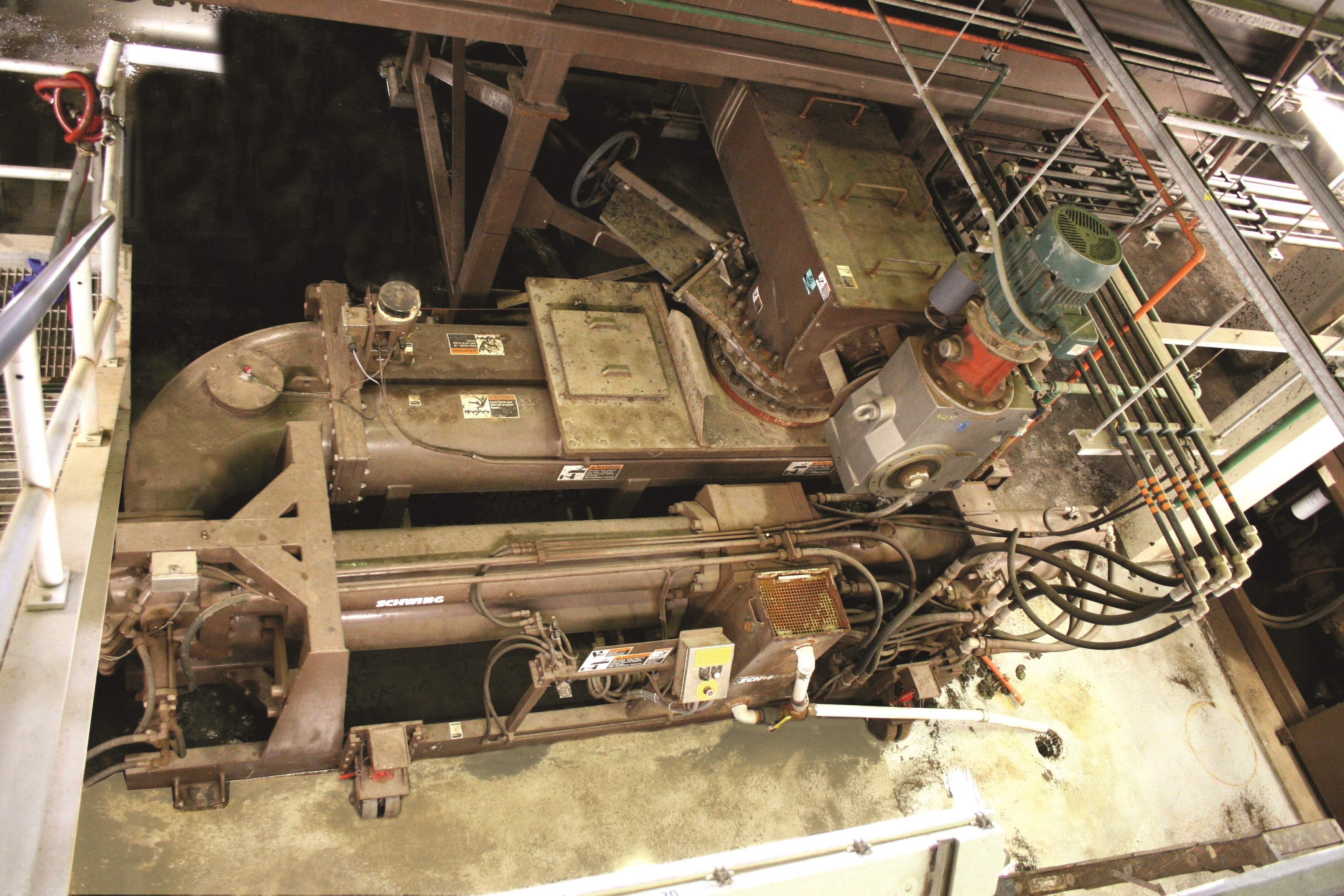 The first thing that strikes visitors upon arrival at Detroit’s WWTP is its sheer size. Covering several city blocks, the plant is the largest single-site wastewater treatment facility in the United States, with a capability for processing approximately 845 million gallons per day (MGD) through secondary treatment. The facility has undergone a number of major expansions since it was first built in 1940. At that time, it served Detroit and 11 neighboring communities; today it handles wastewater from 35 per cent of the state’s total population – a service area that covers 946 square miles.

The most recent of the major upgrades took place in 2004 when, according to Kenneth Paylor, Detroit WWTP’s Senior Maintenance Foreman (Solids), modifications to solids processing were included in the overall plan.

“One of the biggest changes that impacted this area of the plant was the addition of a Central Offload Facility (COF).  Up to that time, dewatered cake was taken by conveyor to a lime pad that was used to support land application for the biosolids.  When that land use was discontinued, however, an alternative was needed.  The COF, essentially a truck loading area to transfer biosolids to area landfills for disposal, is now that  alternative

To process its huge volumes of sludge, Detroit’s WWTP relies upon 14 incinerators located in two separate solids buildings, identified as Complex 1 and Complex 2 (C1 and C2). Solids content before dewatering ranges from 1.2 to 7% – generally in the 4.5% range. Paylor says the plant’s dewatering effort also underwent major changes in the ‘04 upgrade.

“To upgrade the dewatering operation, a number of belt presses were totally replaced and centrifuges were added in ’04,” he says. “We now dewater sludge with ten centrifuges and 22 belt presses: ten in C1, twelve in C2. Material exiting the presses has a solids content of about 23-27%; out of the centrifuges it can be in the 27-32% range.”

The Need to COF

In an ideal world, all of Detroit’s dewatered sludge would be sent directly to incineration, making the need for alternative disposal efforts a moot point. But this is not a perfect world and, to best deal with situations that are occasionally out of the ordinary, the COF was included in the design.

“There are times when we might have an incinerator or two that are down for maintenance and material needs to be re-routed,” says Paylor. “Another example is if our incoming volumes rise quickly – as they can after a heavy rain – and we are exceeding what we can normally handle. There was no way to avoid it; we needed a way to get material from C1 to a point where it could be hauled off site for disposal.”

Such occurrences are more commonplace than one would suspect. Even given the large number of incinerators in use and the obvious preference to keep those units fed with material to minimize fuel costs, Paylor says roughly 40% of their cake still heads to the COF. “That is when the Schwing Bioset pumps come into play: getting the cake from the belt presses in C1 to the COF where it can be treated with lime for odor control and loaded into trucks.” 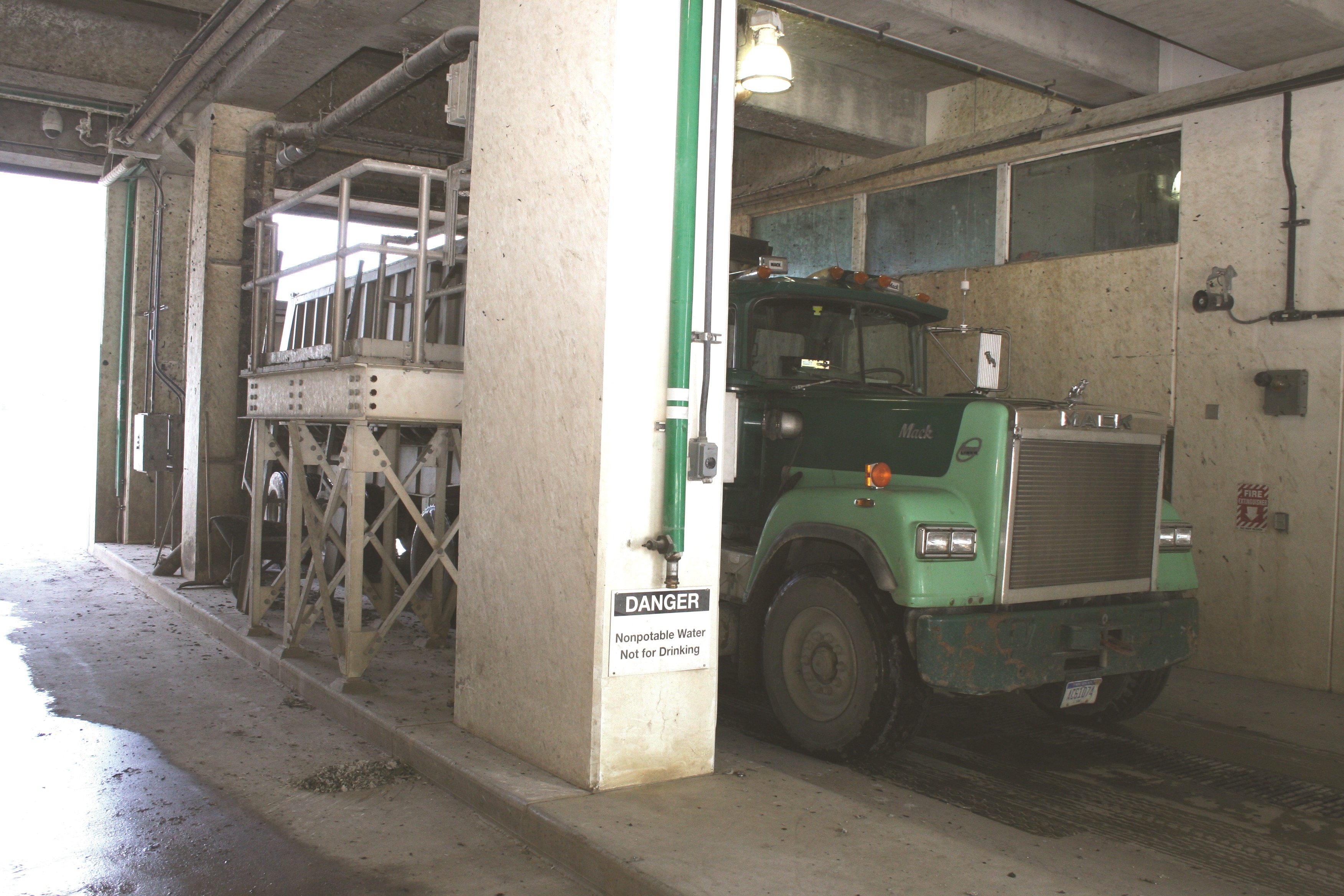 Using pumps to move cake in wastewater treatment plants is hardly a new concept. Scores of plants throughout the country—and internationally as well—have seen the benefits pumping can provide over moving material by conveyor. Improved production, better efficiency, improvements in site cleanliness and reductions in odor are just some of the gains that can be made by pumping.

“To get material to the Schwing Bioset pumps, which are located in the lowest level of the facility, a belt conveyor first collects the cake from all ten belt presses in C1,” says Paylor. “That belt feeds a Schwing push floor, which, in turn, feeds the two KSP 110V(HD)L pumps.”

With a maximum operating pressure of 1,500 psi, cake is pumped in high-pressure piping out to the COF. Mind you, it’s a fairly decent distance out to there.”

That assessment would appear to be something of an understatement. According to Keith McWilliams, Detroit’s Plant Supervisor, the distance from the C1 pumps to the COF is in excess of 500 feet. “Material first has to go up five stories—that’s 60-70 feet alone,” he says. “Then it has to make its way over to the facility, so 500 linear feet is probably a conservative guess.”

McWilliams says there are alternatives to pumping the cake such a long distance. One of those, he says, is pumping it over to C2 where it could be dropped onto belts and taken to the COF.

“While that’s feasible, it is much better to do it this way,” he says. “Once we’ve put the cake into the pump, we may as well take it as far as we can. There is no advantage to dropping it on a belt—in fact, it’s a whole lot messier—and the pumps have shown that they can more than stand up to the challenge.”

Both Paylor and McWilliams say that since installation, the Schwing Bioset pumps, some of the largest the company makes, have been solid performers. XL model pumps were selected for Detroit WWTP based on the anticipated challenges to be placed on the units. Those particular models feature heavy duty poppets which reduce material velocity through the poppet housing. Doing so can result in a variety of benefits including: a reduction in pressure drop through the valve housing, an increased filling efficiency of the pumping cylinders, and a reduction in wear on the poppet discs, seats and pumping rams.

“In the five years the pumps have been in place, we’ve had very few issues with them, and those we’ve had, have all been minor” says Paylor. “That’s outstanding, given what they’re asked to do for roughly 30 hours every week, year round. Providing a continuous flow rate in the 150 to 200gpm range and taking it that distance is really impressive.”

As mentioned, Detroit WWTP has seen its share of changes over the years, and new approaches to dealing with the biosolids are always under consideration.

“We even have contingency plans already in place to handle things before any of those major changes occur,“ says McWilliams. “We put in different access points, for example, where the Schwing Bioset pumps could feed the conveyors in C2.

Regardless of the direction Detroit’s WWTP takes, both McWilliams and Paylor say they are confident the pair of Schwing Bioset pumps will figure into those plans.  “Whatever happens will most likely involve further movement of the cake, says Paylor.  “And, given what we’ve seen from the pumps so far, I’m sure they can meet that challenge. They’ve been real workhorses for us.”